With our new crew (John, Doug, Peter and Sean) in town, we decided to follow our dive master Sergio’s recommendation and had our first team dinner at Tasca Das Tias, in Angra Do Heroismo – just a few minutes from the marina.
Sergio had described it as a bar with tapas-style food.

What an understatement – this might have been the best food we had across the Azores!, and that in a wonderful setting at a very attractive price.
The owner of the restaurant put a very nice selection of appetizers together and followed that by even nicer varieties of main courses that we all shared. Of course the desert and coffee did not disappoint.
The wine, not local but from mainland Portugal, was equally outstanding.

While we enjoyed the first round of appetizers, we asked if there was anything special on offer that we should know about. The answer was “Cracas”. What is Cracas??

Cracas is a sort of giant barnacle, common in the Azores and considered one of the most popular seafood. And we were lucky that we came here right in the middle of the sort season for these. After Corinna got a free Cracas to sample, we ordered three plates with giant barnacles and a couple of bent, rusty nails to pull them out of their shell.
What initially looked quite dubious, turned into a delicious appetizer after we got a short explanation as to how to eat them, drink the ocean water and have a shot of white wine out of the empty shell.
We were amazed and will not forget this experience any time soon.

A few impressions of our first night in town: 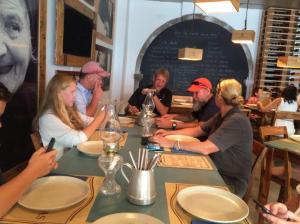 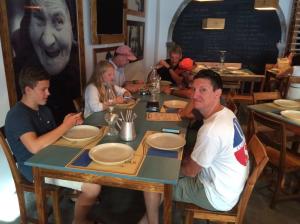 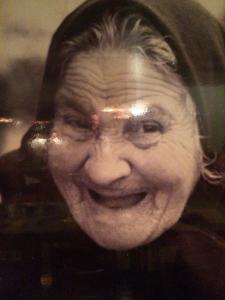 They brought along quite a few goodies:

1. New, lighter windvanes – Peter built a varieties of shapes with much lighter woods as we believe that the current vanes are too heavy to steer efficiently
2. Cross bar & velcro – Peter also built these. They will be installed inside port storage, where all the canned goods are located. Goal is to install these bars in a way to keep the cans inside the storage even if the doors open. This had been a problem when the boat heeled over to starboard and the can open the door from the inside
3. Check valves and hose clamps – Peter also got those for us. We learned that when connected the starboard fresh water tank while heeling over heavily to port, that the water drained itself via the newly installed handpumps in the bathroom (on port). We will install a valve in all line to handpumps to control waterflow going forward
4. Two new LED domelights – John got those. They will replace the broken one in the bathroom and kitchen
5. New Genoa halyard – Built by Kevin and NorthEast Rigging to replace the one we broke during leg 1
6. Rotor guards – finally available for the Phantom 3 and shipped to MA just in time, they should make flying our drone while sailing a lot safer and hopefully reduce the risk of losing the drone significantly.
7. Phantom 3 backpack. This also came to market just in time and now enables us to actually bring the drone back home without breaking it on the plane
8. Protection filters for HD drone camera. DJI finally offered a lens protection for the currently quite exposed camera
9. additional goodies that Peter sent along, such as Sweet Baby Rays BBQ sauce or self built cork work to protect the cockpit cushions during out meals (corks were collected on the Azores)

Thanks to all that helped in getting these items and bringing them over to the Azores.

We left Velhas on Sao Jorge on Thu evening as the forecast had predicted about 10kn SW throughout the night and not much for the following days. The first four hours were fantastic gennaker sailing in calm seas with the sun setting behind us, Sao Jorge on port and Pico to starboard. As it got darker, the islands’s street lights illuminated the contours of the mountains. The sky was covered with stars. You couldn’t ask for more. When we neared the tip of Pico around midnight the wind died and we motored for 2 hours. As the wind picked up again, Teceira’s lights were clearly visible on the horizon. We hoisted the gennaker again.

Unfortunately, we only enjoyed this nice broad reach in starlight for only one hour, as the wind picked up faster and stronger than forecast. The situation quickly turned ugly, as we were not able to pull the gennaker sleeve down to get the sail under control. We needed Nick’s help (in only his underwear and life-jacket) to pull the sail back on board and settle down.
After that, we slowed the boat to time our arrival so that we got to the harbor after dawn.

Arriving at the reception dock, the first impression is deceiving as the cliffs are dominated by a modern hotel and the reception dock is exposed to significant swell. It did not help that the internet speed set a new record in “how slow can you go”.

However, don’t judge a book by its cover… – Angra do Heroismo is a UNESCO World Heritage Site for a reason! The cobblestone streets are lined with beautiful old houses, nice restaurants, boutiques, lot’s of churches, beautiful gardens, outstanding lookouts, etc – there is a fortress on either side of the harbor, which is dominated by Monte Brasil, a former volcano. Angra was first settled in 1460 and you can still feel the history wherever you go. A truly amazing place (it even has hotels with extremely fast internet access…)

After we got checked in by yet another extremely friendly harbor master, we were lucky enough to get a slip offered way into the harbor and close to the facilities. Tioga is clearly way to long for that spot, but we were happy to get out of the swell, closer to the action and to one of the two sand beaches of Terceira. With the scuba park on the other side of the seawall we’ll hopefully get the kids out for their first dive soon.