What a finish to the day!

We had a pretty perfect day on the water already and did not expect much from A Coruna. The feedback we got when calling the marina closest to the City was that it was full, fog had come in and the initial building facing the ocean were not exactly elegant…

However,
we were pleasantly surprised:
– when calling the harbor master again, he confirmed they had space in Marina Real -(the tall-ship event had just ended and cleaned out the harbor, also explains why we met all these beautiful large sailboats hours earlier when approaching Spain) –  check!
– motoring into the harbor the fog lifted and the oldest Roman lighthouse in use today, UNESCO world heritage site – Torre de Hercules – became visible – check!
– instead of the somewhat industrial look, a lot of historical or nice building revealed themselves around the marina – check!
– although we arrived relatively late at 21:00, the marina office was still open, had an efficient check-in process and lots of good local advise – check!
– showers are free, wifi reaches the boat and LTE reception is very good – check!
– we found a great little restaurant at the corner of the beautiful square and had a simple but amazing dinner – check!
– the downtown maze of narrow streets was still packed way after midnight with endless bars etc full of lively activities – check!
The fact that we were given the half-full bottle of Aguardiente as a present since we inquired about buying one (they poor it into the espresso…) rounded off the day even more 😉  (it is always worth asking “what is in the jar?”).

After that sensory overload we went to bad happy to have finished a long and very nice sail with such a memorable finish. 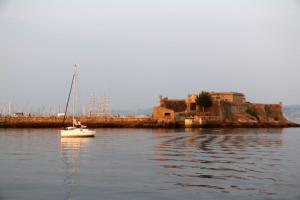